The blueprint to smarter youth soccer training has arrived! Soccer Intelligence, Developing the Tactical Decision Maker provides a complete guide on how to give young players the training they need to be able to make fast, accurate decisions and keep possession better. This book explains how you can overcome the mistakes most youth coaches make by helping young players to develop the soccer brain to partner improvements in technique

Many youth coaches make the same mistake: They pursue short-term goals over long term development. Too often the focus is on technique and conditioning rather than on developing the soccer brain players need to achieve their potential. Whilst players may emerge from the foundation stage of their training physically fit and with good ball skills, they often lack the intelligence then need to solve problems, anticipate the flow of the game and make the right decisions on where to play the ball. The result is players with good ball control but without the soccer brain to use the ball wisely.

Soccer Intelligence, Developing the Tactical Decision Maker provides a blueprint for improving how players should be coached at youth level. It explains how they can be trained to develop the skills in their brain as well as those in their feet. Topics covered include the five aspects of a youth player’s learning process, the mindset needed to play each position effectively and how to run training sessions that develop soccer intelligence. In addition, Soccer Intelligence is packed with drills and training exercises that will put theory into practice, and make improvements to your players’ decision making and smarter teamwork. 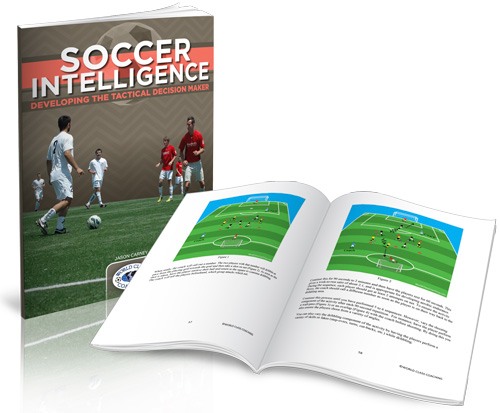 Helping young players to develop smart soccer brains is one of the hardest challenges coaches face. But it’s just as vital to a player’s development as technique or stamina. Soccer Intelligence demonstrates how to do it, with a blueprint that could revolutionize how you coach youth players at your club.

“The days of street soccer and kids developing soccer intelligence in recreation parks or in the streets are largely over. It’s now down to coaches to provide this intelligence training for them”

Two decades ago, kids with a love of the game would play soccer for hours in parks or in the streets. But in this age of video games, the internet and other distractions, kids seem to spend more time looking at a screen than playing with a ball at their feet. This means that today’s young players often arrive at training academies without the foundations of ball control or soccer intelligence of previous generations.

This problem is exasperated when coaches focus too much on stamina and technique alone. While understandable, a team isn’t going to be successful if players aren’t able to make quick and accurate decisions on how to solve problems, on where they need to be and what they need to do with the ball. For this reason, it’s vital that coaches find ways of developing their young players’ soccer brains to match their technical skills.

Soccer Intelligence is a special book focused on developing the soccer brain. Packed with analysis on player positions, the mental attributes players need and an extensive selection of training drills and exercises, Soccer Intelligence is vital reading for any coach wishing to avoid the common mistakes and provide their young players with the foundation they need for developing into elite performers. 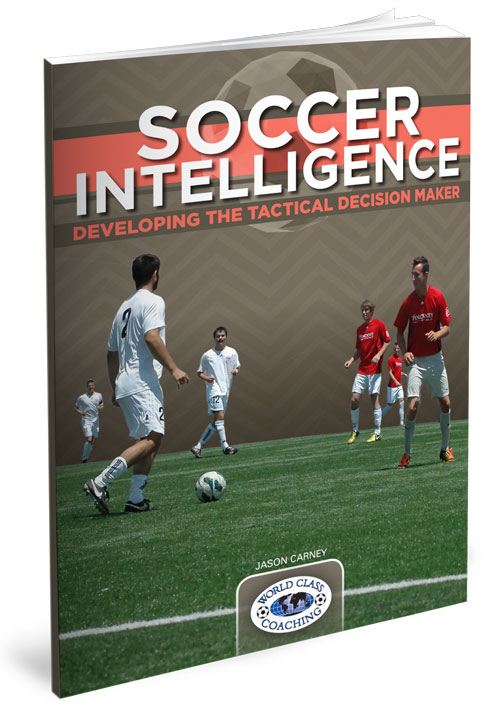 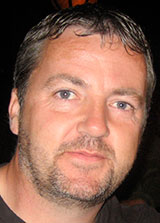 Born in Bolton, England, Jason Carney developed a love of soccer from a young age. At 15 he was given the chance to take his passion from the recreation fields onto the academy pitch, with trials at Bury FC and Oldham Athletic FC. While unsuccessful in his bid towards becoming a professional player, Carney’s love of the game remained undiminished. He continued to play soccer at regional league level, playing for Ramsbottom United (Bury) in the North West Counties League for five years.

At 26 years old, Carney decided to start preparing for a life in the game after his playing days were over, and began studying for his coaching licenses. His coaching career received an early boost when he was appointed as a scout for Oldham Athletic FC, who at the time were in the English first division.

In 1996 Carney then got the opportunity to coach at Championship League side Preston North End FC. The following year, Preston appointed Gary Peters as the Academy director and, current Manchester United manager, David Moyes as first team coach. Carney was able to gain a first class tutelage in coaching from observing how Peters and Moyes organised coaching sessions for the team and interacted with players. In particular, Carney observed how they developed intelligent players, providing the foundation for this book.

While at Preston, Carney took his UEFA B license in England and, with Moyes’ recommendation, took his B license in Scotland. Carney remained at Preston North End FC until 2002 before joining the staff at the highly acclaimed Manassas, VA, coaching academy.   Jason also holds the NSCAA Director of Coaching Diploma.

Reflecting on his time at Manassas, Carney said, “Coaching at grass roots level in the USA has really helped me develop. Those little details that I ignored at Preston have to be used in this environment of coaching. We have to squeeze every ounce of effort and ability out of the grass roots player. It’s a challenge, but one that improves you as a person and as a coach.”

In 2008 Jason moved to Portland, Oregon, where he is now the Director of Coaching for Foothills Soccer Club and where he continues to inspire and challenge players at every level to play with intelligence along with technique so they can reach their full potential.

Soccer Intelligence, Developing the Tactical Decision Maker is a guide on how to provide youth players with coaching that develops their brains as well as their technique and stamina. It explains how to avoid the common mistakes made at 8-11 age foundation level through providing training that helps players learn how to solve real game problems and make the right decisions that will help them to develop into more effective team players.

Five aspects of the learning process – how coaches can endeavor to develop the knowledge and intelligence, objectives, planning, priorities and reading of the game in young players.

Coaching vision for players – What players need to understand to mprove, how they can be coached to deal with failure, the physical demands of the modern game, tactical awareness and how to ensure technique combines with intelligence in the right way.

Players responsibilities and characteristics – Carney analyses each position to provide an assessment on the qualities coaches need to develop for each, what they need to do when out of possession and the mental aspects of their role in the team.

Structure of a soccer club for multiple age groups – How to build the foundations for continuity in how players improve their game intelligence and develop through the youth stages from ages 8 through to 18. 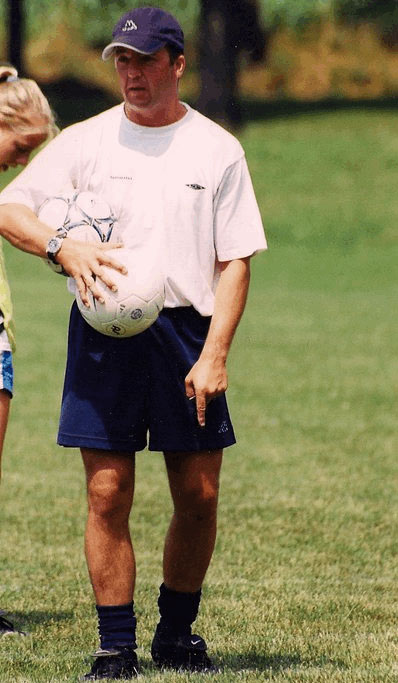 Team building – How to make players feel important and valued so they work together in a cohesive unit. How to encourage them to accept responsibility and instill a good teamwork ethic. Developing a belief in maintaining possession above all else, attacking to win games and the importance of being sensible to play the right balls.

Coaching qualities – Why coaches mirror the team and are part of its vision. This includes how they influence the team’s performance through their choice of technique, formation and style of play. Why coaches must be able to handle stress themselves, at the side of the pitch, if their players are going to handle it as well.

How plan practice sessions – How to provide the foundation on which players can develop by giving each session a purpose and through challenging players, both physically and mentally. Providing the right foundations will ensure players continue playing for longer, with valuable lessons that will help them progress in the game and in life.

What you will gain from Soccer Intelligence

The days of young players developing soccer intelligence through hours of ‘street soccer’ are largely over. Instead, coaches need to find ways to develop quick decision making and problem solving on the training pitch.

From reading Soccer Intelligence, you will gain:

Focusing too much on technical skills, and not enough on tactical and mental skills, is a common mistake at every level of coaching, and not just youth. This makes Soccer Intelligence a valuable addition to your library whatever level you coach at. If your players are struggling to fully utilize their talents and keep making the wrong decisions in games, they will benefit immensely from Soccer Intelligence training.

WORLD CLASS COACHING is recognized globally for the quality of its soccer coaching resources, which are used by over 40,000 soccer coaches from around the world. We wouldn’t be offering Soccer Intelligence unless it achieves our exceptionally high standards. However, if you are not 100% satisfied with the quality of Soccer Intelligence after six months of implementing its drills and exercises then please contact us for a no quibbles refund. 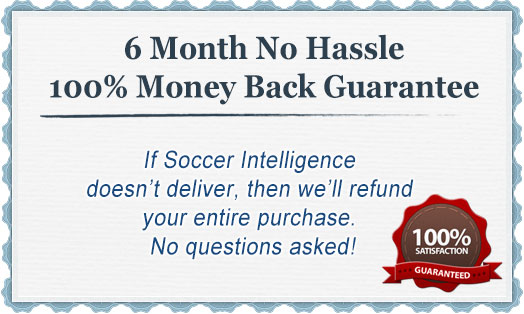 “If all your practice sessions focus on technique and running around cones, you’re making a mistake. This book shows you how to provide the mental training they might be lacking”

Today’s best coaches understand the importance of soccer intelligence. They know that they can have the most technically gifted players in the world but their team will struggle if their players constantly pass to the wrong player or make bad decisions. Time and again, it’s been proven that an intelligent group of players that knows how to play as a team will beat a highly talented but disorganized side.

Soccer Intelligence is a special book which shows you how to develop a team that plays with intelligence and smarter decision making. It exposes the common mistakes made at youth level and it explains what mindsets need to be instilled in each position to create a smoother playing side with a strong team ethic. It also provides a complete set of drills and exercises for putting theory into practice.

Whether you coach youth sides or professional teams, all players require training that help to develop their mental skills along with their physical ones. Soccer Intelligence provides a blueprint on how this can be done so you can build a team that’s mentally prepared and has the right mindset that can propel it to success against any technically gifted but intelligence lacking opposition.

P.S.  Soccer Intelligence is a book focused on how to develop the soccer brain at a youth level and avoid the common mistake of focusing too much on ball skills and stamina. This book provides an expert analysis on the mental aptitudes required of players at every level, how to develop the right mindsets for success and a series of drills for developing agility in the brain to partner that in the feet.

P.P.S  If you are not 100% satisfied with the quality of the soccer coaching resources in Soccer Intelligence after six months then we will refund your purchase in full, no questions asked.