Create players with the confidence, conviction and relentless aggression to win more 1v1 situations all over the pitch and build a team of dynamic duelists

Wow, now this is how to create a confident team! The Art of the Duel – Elite 1v1 Training offers a comprehensive guide on how to develop players with the killer first touch, ball mastery and aggression needed to win 1v1 situations so you can keep possession and score more goals. Packed with drills and coaching insights, this book will help you will discover how “the team that wins the majority of 1v1 duels will win the majority of the games”.

Do you get frustrated watching your players continually lose the ball in 1v1 situations? Do they lack the confidence to deftly dribble past defenders? Or do they seem clueless on what to do with the ball? If so, they will benefit from training focused on developing the technical skills and mindset needed to win duels and dominate 1v1s in both attack and defense.

The Art of the Duel – Elite 1v1 Training is a special book focused on the technical skills, mindset and drills you need to create a dynamic team of take on artists and duelers. Featuring a complete guide to all the technical moves your players can use to get past opponents, guidance on the mindset they need to be successful and fifty 1v1 training drills, this book covers everything you need to know on coaching your players to get past defenders and win possession from opponents. 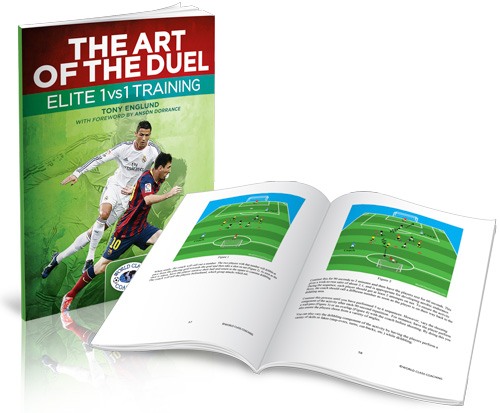 As an introduction by legendary coach Anson Dorrance states, “the team that wins the majority of the 1v1 duels will win the majority of the games”. This is a rule you will discover in action after providing your team with the insights and training covered in comprehensive detail in The Art of the Duel – Elite 1v1 Training. 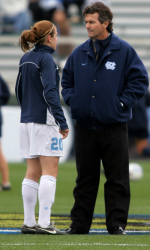 “Tony Englund has managed, in one volume, to assemble a pointed synopsis of the critical training cues for teaching players to shred opponents on both sides of the ball and also a terrific variety of 1 v 1 training environments. The strength of this volume is that it gives coaches the ability to keep 1 v 1 training fresh at any level and throughout the season. Tony not only incorporates many simple 1 v 1 settings, but he also combs in a variety of functional elements (i.e. winning balls on the flank or finishing/defending crosses) that will help coaches improve their team attacking and defending as well. Finally, Tony also emphasizes the importance of enhancing players’ competitive instincts through exercises designed to force teammates to duel in team training.

In conclusion, Tony Englund’s The Art of the Duel: Elite 1 vs. 1 Training is a timely and important book. As our ability to coach increasingly well-prepared players and complex systems and styles evolves, we would do well to not lose sight of the importance of also producing players who can dominate an opponent on either side of the ball, and Tony’s book is a great resource for coaches at any level who want to give their players the best training in 1 vs. 1 environments. And as we know, there is no solution for players that break down a defense on their own.

There are few better coaches for inspiration on 1v1 training than Anson Dorrance, having masterminded 22 x NCAA and AIAW Champions and a World Cup winning coach with the US Women’s team in 1991. Whenever players face a team coached by Dorrance they know their 1v1 skills are going to be put to the test.

Dorrance’s philosophy and training provided the inspiration for The Art of the Duel – Elite 1v1 Training and he provides the book’s foreword introduction. In it he outlines his philosophy that teams able to dominate 1v1 duels will win most of their games, a mindset that finds itself exhibited in the ‘competitive cauldron’ training environment at North Carolina.

Creating a competitive cauldron in training, where players duel aggressively to raise each others performance, also influenced the training exercises covered in The Art of the Duel – Elite 1v1 Training. The 50 drills have all been handpicked to enhance the competitive instincts in players and to produce a team that can dominate opponents in 1v1 situations all over the pitch. 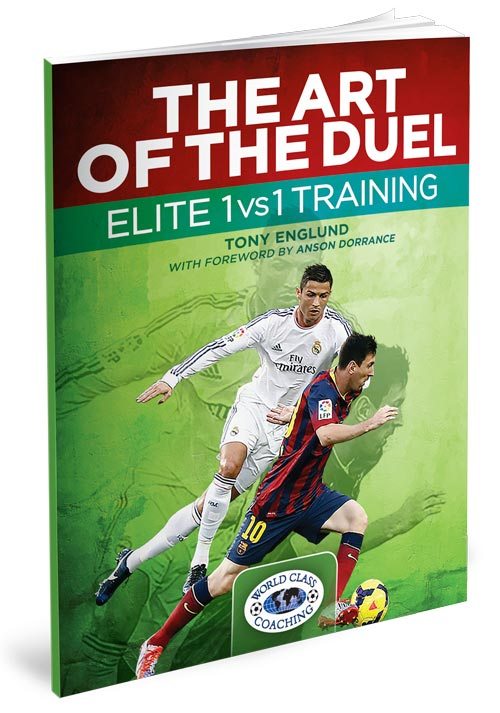 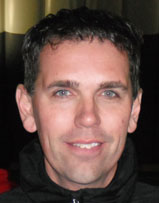 During a fifteen year playing career, Tony played goalkeeper on high-level youth and adult club teams, helping his high school team to a conference title and a number one ranking. Englund’s club teams have earned 5 state championships and compiled more than 350 wins and 50 tournament and league championships and over 70 of his former players have gone on to play at the collegiate level.

Between 1996 and 2003, Englund served as head coach at Hill-Murray Girls High School. During the 2001 regular season the team earned a record of 18-0-0, making them the only unbeaten team in school history.  That year, Englund was named Minnesota State High School Soccer Coaches Association Coach of the Year.

Englund now serves as an Associate Staff Coach for the NSCAA and was one of five coaches selected from a national pool to the original cadre of the organization’s Club Standards Project.  A frequent presenter at high-level coaching symposiums and a highly-successful club coach, Englund serves as the Assistant Director of Coaching at Sporting St. Croix Soccer Club and Academy in Minneapolis. This is his eighth book and seventh published by WORLD CLASS COACHING.

The Art of the Duel – Elite 1 v1 Training can be divided into two halves. The first half focuses on the technical skills and the mindset players need to be effective duelists and capable of dominating opponents. The second half provides 50 training drills specially chosen for developing the confidence, flair and familiarity players need in order to win more 1v1 situations in both defense and attack.

The main sections covered include:

Introduction
Englund opens by explaining why the ability to duel and get past opponents is alive and well. Despite the current focus on a pass and move style, players with strong dribbling and 1v1 technical skills, like with Ronaldo and Messi, continue to dominate the results of games. He then addresses the attitudes which help players to succeed when taking on opponents and which exercises produce the most dynamic improvements.

Dueling to Win: Defending
This section opens by discussing how Barcelona utilizes relentless high pressure to prevent opponents from settling into possession. Englund also assesses the attributes of Thiago Silva, Philipp Lahm and Gerard Pique which place them among the elite of 1v1 performers. This section also provides guidance on the technical skills players need to win duels effectively, including controlling the attacker, jockeying to apply pressure, pressuring to limit their awareness of options and forcing a poor touch by their opponent.

Some of the technical skills explained in this section include block tackle, poke tackle and tactics for denying penetration, such as cutting out the attacker’s run and getting ‘shoulder’ ahead to win the ball.

Dueling to Win: Attacking
The second set of technical skill explains how to win 1v1 situations when on the offense. As Englund explains, the key to winning duels in attack is giving players the hope that they can dominate their opponents like their soccer idols. This process begins with a focus on practical and simple attacking cues. Some of the technical skills covered include holding the ball, getting faced up, using hands and arms to control approaching defenders, shielding and getting separation from defenders with a negative touch. 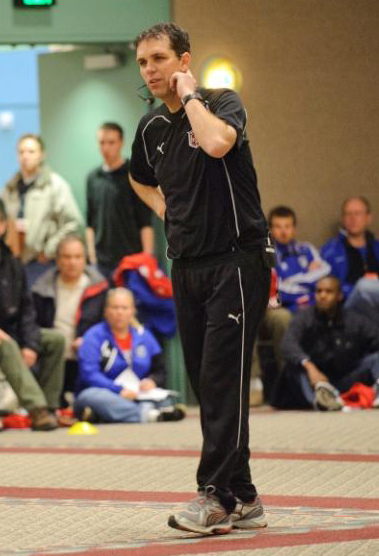 Coach Tony Englund conducting a session at a coaching symposium

Mentality
Developing a confidence and brashness in attack, where players relish taking on opposition defenders, is as vital to success as possessing the technical skills. Englund discusses how to coach players to develop a sense of conviction that they will be successful in beating opponents and how to encourage them with the relentless energy of Messi and a sense of mastery of their craft, like Paulo Maldini.

50 x 1v1 Training Environment
The second half of The Art of the Duel – Elite 1v1 Training comprises of 50 drills for putting the technical skills developed in the first half into practice. Englund has handpicked drills to provide a comprehensive training program in multiple areas of the pitch and to replicate different events in the game. Featuring detailed diagrams, clear explanations and variations, some of the drills include 50/50 ball, controlling the goal with multiple pairs, 1v1 shielding, possession with neutral wall-passes, back to back to a goal, winning long balls, penetration and crossing, alligator alley, goal through balls and many more.

All players dream of being able to perform scissor kicks and spinning twists like Maradona or Messi. But before they can reach that level they require a foundation in the technical skills along with guidance on developing the right mindset. Rather than set the level too high,  The Art of the Duel – Elite 1v1 Training focuses on practical, simple attacking cues and using tactics, such as a sudden change in direction with speed or a simple fake with either foot, to get past opponents or win possession.

From The Art of the Duel – Elite 1v1 Training you will gain:

The Art of the Duel – Elite 1v1 Training serves as both a primer for coaches of young players and a source of new ideas and variations for advanced teams. While there may be a bigger focus on passing and moving in the modern game, there will always be situations where players have to get past defenders or take the ball away from a determined forward. This book shows you exactly how to give your team the technical skills, mindset and the training they need to ensure that you can watch with confidence from the sidelines when these situations occur. 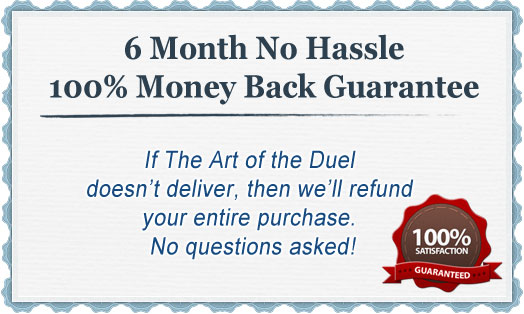 Many coaches seem to think that the days of dueling are over, and that smooth passing alone is how the modern game is played. But while players that can pass accurately are a prized asset, it’s players like Messi, Ronaldo and Gareth Bale who command the biggest transfer fees. Their exceptional ability to dominate 1v1 situations drives the performance of the entire team through getting the ball into dangerous positions, creating goal scoring chances and ultimately win more games.

If you’ve dreamed of developing your own team of duelists and take on artists, The Art of the Duel – Elite 1v1 Training shows you how. Inspired by the training methods of the legendary Anson Dorrance, this book covers everything you need to know on training players on how to win more 1v1 situations, from the technical 1v1 skills required to the mental brashness and confidence players need through to 50 drills for creating a competitive 1v1 training environment.

While smooth passing is a key skill, players will always need to be able to win the ball off opponents or to get it past defenders without assistance. The Art of the Duel – Elite 1v1 Training provides you with the guidance you need so your players can win 1v1s on both sides of the ball and demonstrate why “the team that wins the majority of the 1v1 duels will win the majority of the games”.

P.S.  The Art of the Duel – Elite 1 v1 Training is a special book focused on how to develop a dynamic team of duelists and take on artists. It provides a complete guide to the technical skills your players need to successfully win 1v1s, in both defense and attack, the mindset needed to replicate elite players and 50 drills for creating a competitive training environment that will get players pushing each other to the limit.

P.P.S  If you are not 100% satisfied with the quality of the soccer coaching resources in The Art of the Duel – Elite 1 v1 Training after six months then we will refund your purchase in full, no questions asked.

The Art of the Duel – Elite 1v1 Training