Want to maximize your team’s productivity and make better use of every ball? Get this ‘level 2’ blueprint that shows you how

It’s here! The second volume of our Coaching Possession with a Purpose has arrived! This follow up gives you even more training drills for improving your team’s productivity in multiple scenarios. This time the drills are even more focused on linking midfield with the attack to create more goal attempts and wins on the scoresheet.

The game has wised up. Today’s clued in coaches know it’s not how much of the ball you have but what you do with it that counts. They’ve realized that chasing crazy high possession stats isn’t going to win you games. It’s playing with maximum productivity that will.

Coaching Possession with a Purpose Volume II expands on the first volume with highly focused drills that train your players to exploit the weaknesses of high possession sides and to make better use of the ball to mount attacks. It includes chapters on switching the play, executing ‘give and go’ combination plays, exploiting creative wing play and much more. 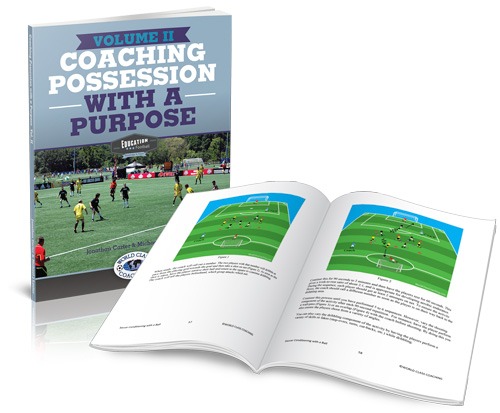 So if you want to join the coaches playing smarter rather than harder, get your copy of Coaching Possession with a Purpose Volume II and discover how even miserly possession can be turned into more balls in the net. 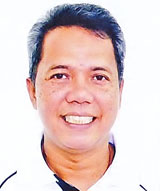 “I find this book to be comprehensive and informative. The sequence of progressions are well thought through, easy to understand and implement. I like the way the graphics are laid out, making it easy to visualize the session as a coach and put to practice in the field.

The conceptualization of each topic; Introduction, Game Relate, Game Specific & Conditioned Match Play allows coaches to have proper sequence to follow, thus allowing the achievement of objectives in each training session.

The sessions presented within “Coaching Possession with a Purpose” will give me a new perspective of playing the ‘possession game”, and not telling players to pass for passing sake!

I will definitely add this book to my collection of my must-have manuals for coaching.”  Michael Adam, Triple T Soccer Academy

In the past coaches, players and pundits all heralded stats on possession and passes as a mark of a team’s worth. We now know this to be an illusion. Time and again, teams with only a small share of time on the ball have been able to win games. And it’s not down to luck.

Coaching Possession with a Purpose Volume II goes further than the first book in showing you how to take advantage of teams that have yet to move with the times. It provides you with drills for ten different scenarios and how to exploit teams still chasing high possession stats.

With game plans on exactly what to do, your players will feel comfortable allowing opponents to pass around in their own half. Like a coiled spring, they’ll be ready to mount slick moves that slice through the opponent’s defense and turn every share of possession into a goal scoring opportunity. 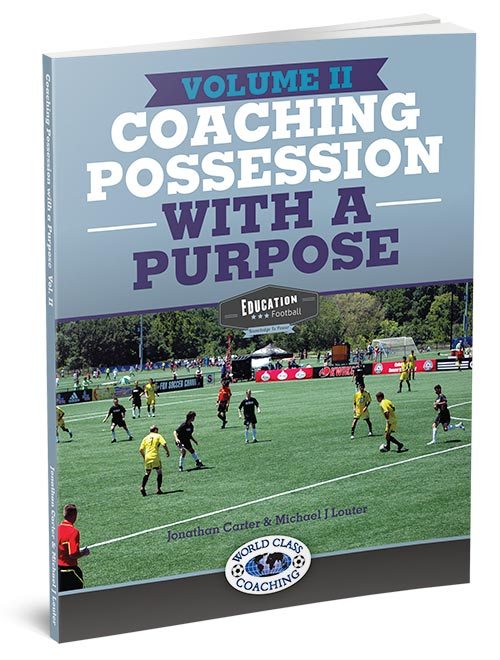 Written by two coaches with vast and international experience 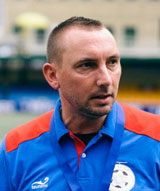 Coaching Possession with a Purpose Vol II is a book born from the passion of its two authors, Jonny Carter and Michael J Louter, for developing the core skills young players need for success.

Carter has coached his own ‘Principles Based’ methodology on tactical soccer across Europe, America and Asia. His key specialty is youth development and establishing the right culture and environment in which young players can grow. He’s a strong believer in giving players the opportunity to solve real soccer problems, rather than rely on a dictated style of coaching, in order to grow.

Carter holds an ‘A’ License and is head coach at Kowloon Cricket Club, Hong Kong, and is responsible for delivering the Nike Sports Camp in Hong Kong for elite youth players. He also runs the Education Football program, which trains coaches to develop their knowledge from foundation through to advanced.  Carter and Louter are also the authors of Coaching the Principles of Soccer – Attack and Defense and Volume 1 of Coaching Possessions with a Purpose

Michael J Louter has spent his life studying soccer coaching. In particular, he specializes in soccer psychology and the technical and tactical components that need to be combined to build a successful team. 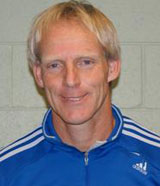 Louter holds a USSF ‘A’ Licence and an NSCAA Premier Diploma. He is currently the Director of Coaching at FC Dallas Tri and oversees the development of the U15-U19 teams.

What’s covered in Coaching Possession with a Purpose Volume II

The first book in the series focused on laying the groundwork for playing more productively and maximizing every ball. The drills were ideal for teaching the general concepts and principles of playing with purpose.

Coaching Possession with a Purpose Volume II builds on the first book’s foundations with more position specific training. The drills in this follow up have been carefully selected to highlight the priority aspects of purposeful possession in multiple scenarios. This includes drills for developing creative wingbacks, building direct killer passes, escalating the speed of play and constructing counter attack patterns. 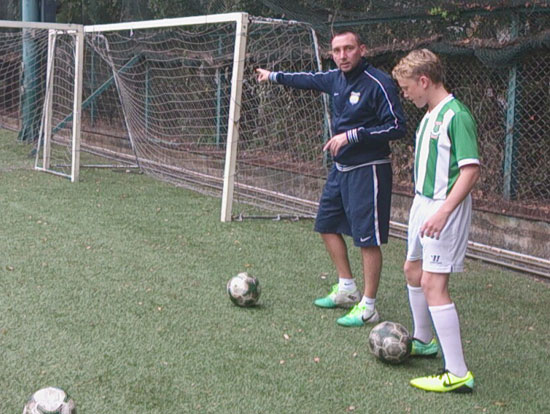 Ultimately, Coaching Possession with a Purpose Volume II is not just about teaching attacking moves but also creating an environment that encourages risk, skill and attacking soccer. The result is your players become more creative as well as knowing exactly what to do with the ball in key points in the game. 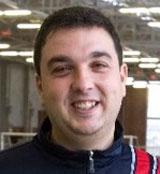 “This new coaching manual from Jonny is a cracker. Jammed packed with carefully crafted training activities that really escalates a mere possession-based exercise into a training tool with massive impact on players and the team game-play style as a whole.

The scalability of the session plans allows me the flexibility to pitch the session exactly to the needs of my players, the vast majority of the exercises included within can be rolled out and delivered to a range of teams regardless of playing quality.

Possession based training activities are a staple in most coach’s repertoire, but this book raises the level into a new domain of coaching. Most recommended.’
” Nicolas Possetti, UEFA ‘A’ License, Technical Director/Coach

Modern soccer has changed. No longer is possession pursued above all else. Smarter coaches know that what really matters is what you do with the ball rather than how long you have it for. Coaching Possession with a Purpose Volume II provides the drills and the tactics for a range of scenarios that can turn even the most miserly possession into goals on the scoresheet.

From Coaching Possession with a Purpose Volume II you will gain:

Whether you want to expand on the drills in the first volume or want to jump to a more focused and disciplined approach to possession, Coaching Possession with a Purpose Volume II is packed with drills that turn more time on the ball into goals. Instead of pass completions and time on the ball, you’ll be able to focus on the stat that really matters and that’s wins on the league table.

WORLD CLASS COACHING is recognized globally for the quality of its soccer coaching resources, which are used by over 40,000 soccer coaches from around the world. We wouldn’t be offering Coaching Possession with a Purpose Volume II unless it achieves our exceptionally high standards. However, if you are not 100% satisfied with the quality of the Coaching Possession with a Purpose Volume II after six months of implementing its soccer drills and exercises then please contact us for a no quibbles refund. 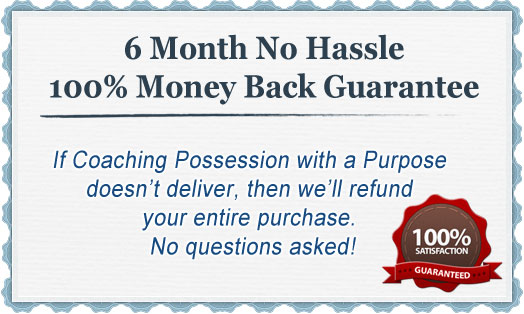 The game has got wise. The era of pursuing high possession stats is drawing to a close. Instead, forward thinking coaches are focusing on maximizing their productivity with every ball.

Coaching Possession with a Purpose Volume II is packed with highly focused drills that will train your players on exactly what to do to advance the ball to the opponent’s goal. This includes midfield support for the attacker, ‘give and go’ combo plays and harnessing a #10 playmaker.

The result of practicing the drills in this ‘level 2’ guide is that players will know exactly what to do with the ball. Your team will be comfortable allowing the opposition to waste time in their own half knowing you’re only a tackle and a few passes away from scoring.

P.S.  Coaching Possession with a Purpose Volume II is a ‘level two’ guide on exactly what to do with the ball in multiple scenarios. This guide is packed with drills that are more focused on integrating the midfield with the attack. The result is that even the most miserly possession turns into wins on the scoresheet.

P.P.S If you are not 100% satisfied with the quality of the soccer coaching resources in Coaching Possession with a Purpose Volume II after six months then we will refund your purchase in full, no questions asked.