Are compact, wall-like defenses frustrating your attack and stopping you from scoring? Discover how the elite teams smash through the most stubborn of defenses in this special video series

Finally, a way through on goal! Attacking a Compact Defense is a 12 part video series which analyzes how elite sides like Arsenal, Bayern Munich and Inter Milan are able to get the ball into the box and score goals in abundance. Every video features expert commentary which explains how they buildup their attack and how you can harness their tactics in your own side to break and create more goal scoring opportunities.

When the opposition decides to ‘park the team bus’ in front of goal, and defend deep in their own half, it can seem as though there’s no way through. With no space to move into, you can find yourself taking endless potshots from distance, with little chance of scoring. But compact defenses don’t deter elite sides or stop them from creating chances. If anything, a packed defense can become an advantage when you know how to exploit it.

Now you can discover how the elite sides break down compact defenses in this highly focused video series. Attacking a Compact Defense features 12 videos and an eBook which provide a tactical analysis using real game footage of how elite sides and players break through stubborn defenses and score goals in abundance. This includes a look at the dribbling style of Ribery and Robben, how Arsenal and Borussia Dortmund harness the width to create chances and how Inter Milan patiently wait for an opening. 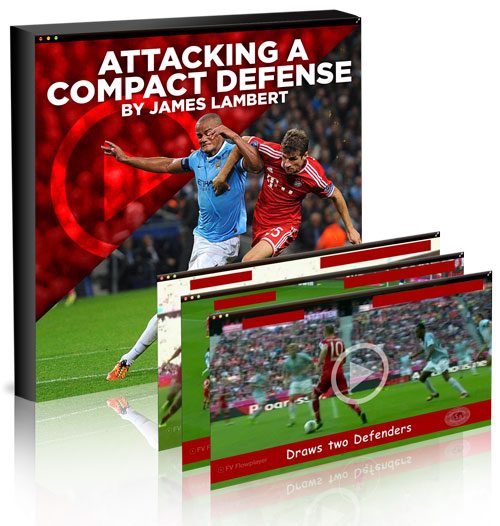 In addition, Attacking a Compact Defense provides functional skills dribbling exercises, an example of a small sided game and a free eBook so you can replicate the skills you watch in the videos on the training pitch. So if your team is struggling to breakthrough stubborn backlines, discover how the elite sides smash through and win more games.

“If you need creative ideas on scoring past a seemingly impenetrable defense, who better to learn from than the elite sides”

There are many times when you’ll come up against a stubborn back line. Whether it’s defending a lead, to run down the clock or to soak up pressure before counter attacking, there are many situations when opposition teams will pack the area to stifle attacks. In these instances, the normal tactic is to keep shooting from distance. But this approach relies on luck and the keeper making a catastrophic mistake. This is why it isn’t an approach you’ll see being used by elite teams. Instead they’ll use creativity and tactical moves to pull defenders out of position and to create space so they can create opportunities to score inside the box.

Now you can watch how elite sides smash through seemingly solid defenses like a knife through butter in this special video series. Comprising of twelve videos, Attacking a Compact Defense profiles a range of elite level tactics for getting the ball through, over and around the defensive wall and through on goal. This includes the use of tactical dribbling, inswinging balls from the wings and knockdowns inside the box. With expert commentary throughout, this video series analyses these tactics and many others you can use to break through packed, stubborn defenses and push the scoreline in your favor. 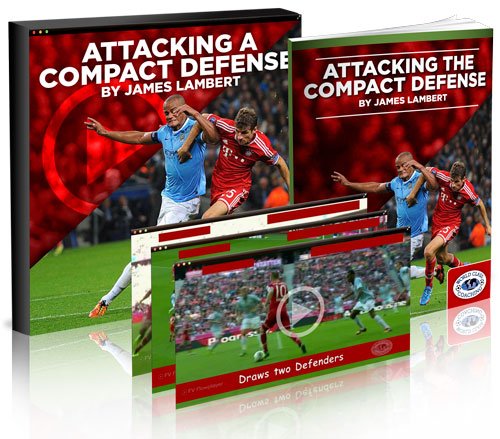 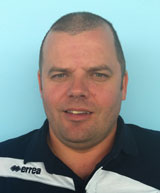 All of the videos in Attacking a Compact Defense have been carefully chosen to highlight a particular style of play or set piece, which demonstrate the tactics used by elite sides to open up stubborn defenses and score goals.

Videos 1 and 2 – A game in which Bayern Munich come from a goal behind to beat Mainz 4-1. These two videos demonstrate how to make penetrating passes for the forwards to knock down before scoring. The game also features tactical dribbling and explosive overlapping runs on the wings before making long diagonal passes to the front man waiting behind the opposition’s defensively line.

Videos 3 and 4 – These videos demonstrate how Inter Milan uses its technical skills and patience to wait for a side playing with high intensity to lose its disciple. Lambert highlights how they use tactical dribbling to draw defensive players out of position before playing a penetrating through ball.

Video 5 – Lambert analyses a game between Arsenal and Borussia Dortmund. In this game both teams exhibit how to score through exploiting the pitch’s width with fullbacks and playing the ball from outside the box to a striker waiting behind the defense.

Video 6 – The silky dribbling skills of Bayern Munich’s midfield maestros, Robben and Ribery, are showcased in this clip. They also provide the perfect example of how to harness tactical dribbling to draw players out of position and how to use small touches to beat defenders and to explode into the box.

Video 7 – Tactical dribbling is further analyzed in this video featuring clips from various games. This includes examples of dribbling to win a free kick in dangerous positions, pulling defenders out of the box and running across the line to create space for fullbacks.

Video 8 – Lambert discusses the benefits of getting players running with the ball at defenses so they can either dribble to beat the man with pace or for making overlapping runs and exploiting weak defenders.

Video 9 – Bayern Munich’s devastating diagonal high ball is highlighted in this video, which enables this elite side to routinely score goals from one forward knocking the ball down for the other to score.

Video 10 – This video provides some functional skills dribbling exercises for developing the skills highlighted in the previous videos on the training pitch. Lambert uses diagrams and demonstrations to explain how to perform the drill and how to progress it.

Video 11 – A passing exercise for developing a diagonal high ball attacking move is explained in this video, with clips of Robben used to demonstrate how to get the ball from the wings into the box.

Video 12 – The final video features a small sided game exercise that encourages players to play an early ball behind the opposition defense and create overloads in midfield.

Accompanying the videos you also get an eBook, which explains in more detail how to run the training drills and practice sessions featured in the videos. Through practicing these on the training pitch, you will be able to develop the technical skills and mindset to be able to smash through compact defenses and push the scoreline in your favor.

What you will gain from Attacking a Compact Defense

When your team is struggling to find ways to break through a stubborn defense, drills alone aren’t the answer. You can spend hours working on technique, but you also need creative ideas on how to pull defenders out of position, how to find space behind the backline and where to play the ball to maximize your chances of scoring. When you need new ideas, where better to look than watching how the elite sides play?

Attacking a Compact Defense is a video series which shows you how teams like Arsenal, Borussia Dortmund and Inter Milan are able to slide through stubborn backlines like water through a breaking dam. From watching this 12 part video series you will gain:

Whether you coach professional teams or amateur sides, there’s a wealth of insights you can gain from watching Attacking a Compact Defense. You can see exactly how the elite sides are able to breakthrough and gain insights on how they do it thanks to Lambert’s expert commentary.

Some coaches prefer books and some prefer videos for their coaching material.  We will give you both.  We have created an eBook showing all the drills and exercises in the videos and it’s your FREE when you order Attacking a Compact Defense video series.  So now you can look at a written description and easy-to-read diagrams while you follow along with the videos. 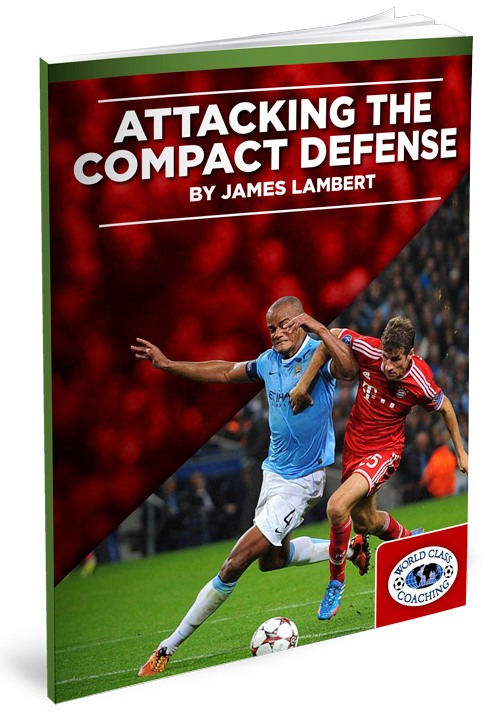 WORLD CLASS COACHING is recognized globally for the quality of its soccer coaching resources, which are used by over 40,000 soccer coaches from around the world. Attacking a Compact Defense unless it achieves our exceptionally high standards. However, if you are not 100% satisfied with the quality of Attacking a Compact Defense after six months of implementing its drills and exercises then please contact us for a no quibbles refund. 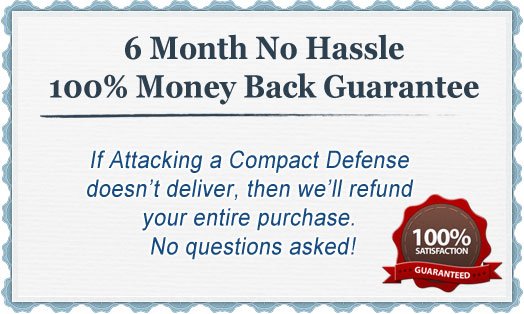 Whether you play at an amateur or professional level, there will often be times when you can’t seem to find a way past team defending in its own half. Whether it’s defending a lead or grinding out a draw, when opposition teams decide to stop attacking and block the goalmouth it can seem like there’s no way through. Lacking ideas, most teams will then just keep shooting from distance, and hope for the best.

There are, however, more effective tactics used by elite sides which you can harness to score in these situations. Attacking a Compact Defense profiles these tactics and provides lots of creative ways of getting the ball into the box and scoring. This includes playing long diagonal balls for forwards to knockdown, tactical dribbling to draw defenders and playing with patience to force a mistake.

From watching this 12 part video series you will gain lots of valuable tactical insights so that the next time the opposition decides to defend deep, you’ll know what to do. Instead of shooting from distance, your team will be equipped with more creative ideas on how to score, enabling them to create more chances and to get that vital goal which tips the score line in your favor.

P.S.  If you’re stuck for ideas on breaking through a compact defense, this video series shows you how. Attacking a Compact Defense is a twelve part video series which analyses how the elite sides break through wall like backlines. This includes an analysis of games featuring Arsenal, Bayern Munich and Inter Milan and the tactics they use to pull defenders out of position and create chances.

P.P.S If you are not 100% satisfied with the quality of the soccer coaching resources in Attacking a Compact Defense after six months then we will refund your purchase in full, no questions asked.

One last thing. If you are an Elite Member, these videos are included so there is no need to purchase them here. Just log in to the WCC TC and click the Video Library and do a Keyword search for “Attacking a Compact Defense”. If you are not an Elite Member, check it out here as you can have access to these videos and hundreds of others for one low price instead of paying separately for each set of videos.