Description:
The purpose of the “Killer Pass Transitions” activity is to create a high tempo simulation of play just beyond, or just in the box, in which players use short passing to break the defensive line and create an opportunity on net.

Setup:
One grid is established in the middle of the field. Grid size is determined by the number of players available. 3v3 grid should be around a 15×30. Depending on the age of the players the goals are placed 10-20 feet away from the long side of each grid. Players are divided into even teams (at least four), and placed on both ends of the short side of the grid (2 per side if there is four teams). 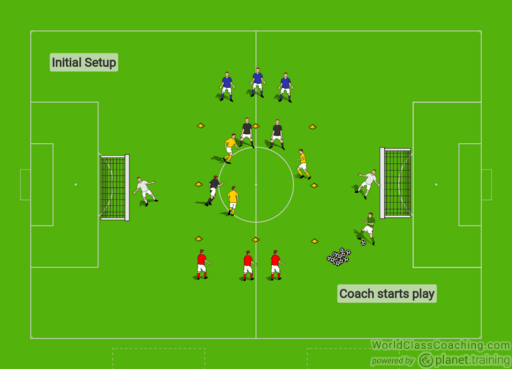 Execution:
Two teams start inside of the grid, a coach then either rolls, passes, or throws a ball into the grid. The players must settle the ball and complete a set number of passes (normally 3) in order to leave the grid and take a shot on either goal. The final pass in the series can be a pass out of the grid, simulating a killer final pass towards goal. 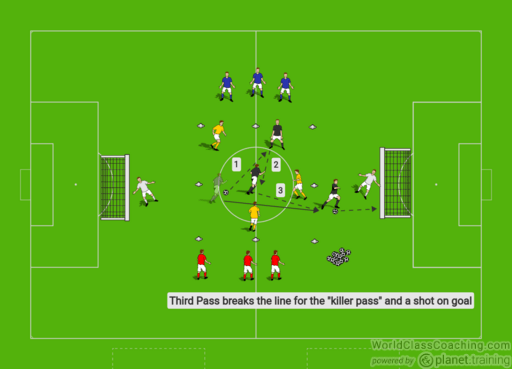 If the shot is saved, both teams re-enter the grid and the goalie plays the ball into the grid to be played. If the shot is a miss that goes behind the net that player’s team is “off” and goes to the sideline to be replaced by a new team, and the coach restarts the activity by playing a ball in. If the goal is scored the scorer’s team stays on and the team that was scored on is replaced. 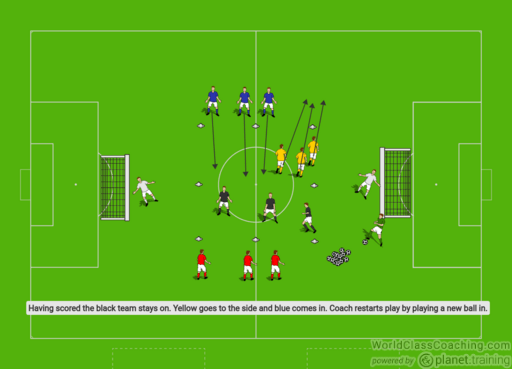 Game ends after a team scores a predetermined number of goals or the time limit is reached.

Variations:
A number of factors can be changed based on skill level, age, number of players, etc. including:
Grid Size
Goal Distance/Size
Number of Players in Grid
Time Limit/# of Goals

The side in which players can score can be altered as well.